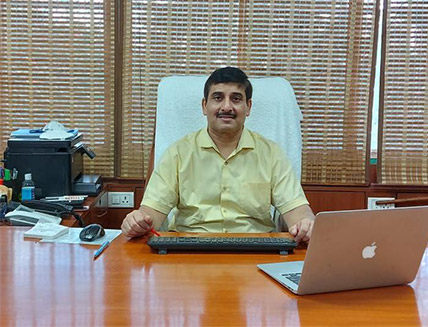 It gives me imminence pleasure to inform you all that Ministry of Culture, Government of India, has opened one more Archaeological Survey of Indias, Circle in Madhya Pradesh named ASI Jabalpur circle by bifurcating Bhopal ASI circle on 27th August 2020. The establishment of a new Circle at Jabalpur took place on 1st October, 2020.Earlier Bhopal circle was responsible for preservation, conservation, restoration and research work of the heritage spread across the State of Madhya Pradesh. Newly created Jabalpur Circle majorly covers the districts of Bundelkhand,Baghelkhand and Mahakaushal region of Madhya Pradesh. It has 22 districts and 108 centrally protected Monuments of these districts to take care off. The creation of this new circle is a very important step taken by the ministry of culture Government of India which will open more dimensions in the field archaeology of Madhya Pradesh.

Archaeological Survey of India is an apex organization for the archaeological researches and protection of the cultural heritage of the nation. The monuments, archaeological sites and remains of national importance are the prime concern of ASI. ASI was established in the year1861 by Sir Alexander Cunningham. From its establishment ASI has taken the responsibility of preserving and conserving the golden past of India and in some other countries too.

Madhya Pradesh is known as the heart of India and it has a long string of Human as well as geological and botanical past. From the largest number of rock painting sites to some of the marvelous temples and forts give this state an important identity. Jabalpur circle has a large variety of Rock painting sites such as Adamgarh, Putali lane etc. Mauryan and Shunga period sites such as DeurKothar and Bharahut, Gupta period sites such as Kankali Devi temple and Parvati temple of Nachna etc. Chandella period site such as Khajuraho which is also a World heritage monument, Kalachuri period site such as Amarkantak, Chausath Yogini Bheraghat and Shiva temple of Chandreh etc. Gond Forts such as Devgarh fort Chhindwara, Madan Mahal Jabalpur etc.

The new Jabalpur Circle is not only dedicated towards conservation, preservation and restoration of the monuments but it  also focuses on new researches, publication and public relations. The circle is open for more suggestions and your contribution towards the betterment of the heritage and sites. The circle is aim to encourage researchers who are willing to do researches in the jurisdiction of Jabalpur circle.

We will also try to reach to the students and visitors soon through cultural awareness programs. In this connection we are aiming to organize Heritage walks, opening heritage clubs in the schools and archaeological villages. with the cooperation of you all we will preserve and protect our great heritage.